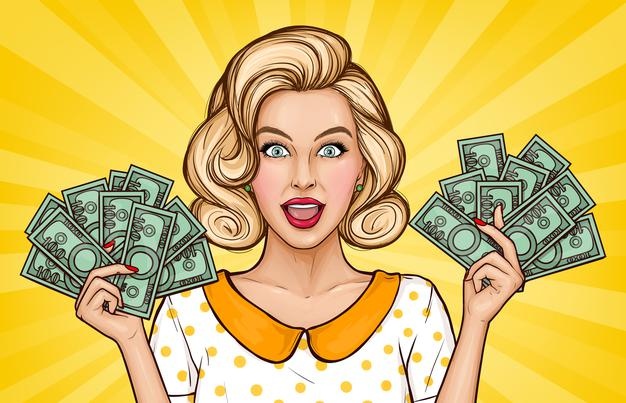 “The 2008 financial crisis broke the bank for us,” Joe told a friend.

“Going out for dinner once in a while won’t break anybody’s bank,” Audrey told Josh.

“My credit card expenses are sucking me dry,” said Jim to a friend.

Eating at expensive restaurants can suck anyone dry.

“How many bucks did you pay for your new smartphone?” Jeff asked Tim.

“Can you lend me twenty bucks? I’ll pay you back tomorrow,” Mick asked Sam.

“I spent about a grand on this computer,” Nick told a friend.

“I think a used car will cost you around 5K,” Jeff told Mike.

Flat broke: out of money

“I’m flat broke. Do you think you could lend me twenty bucks?” Josh asked Dave.

Hard up: in need of money; broke

Dave was so hard up he couldn’t afford to buy a sandwich.

“It’s amazing how Jeff’s life has changed. Some years ago he was a hard up student who didn’t have a clue what he’d do with his life,” said Michael to a friend.

Some people go to the racetrack and bet on the horses hoping to make a fast buck.

Make a bundle: make a lot of money

“Harold made a bundle as a stockbroker back in the 90’s, but lost most of it during the recent financial crisis,” Jill told her friends.

“They are making a bundle selling these eco-products,” Bill told a friend.

Make a killing: make a lot of money quickly and with little effort

“You will make a killing if you sell your company to those Spanish investors,” Jeremy told Brian at the meeting.