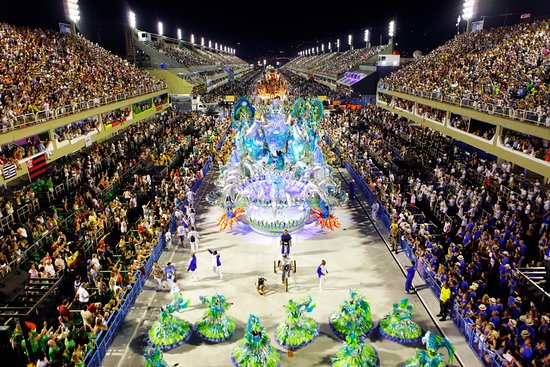 There’s nothing in the world like the Brazilian Carnaval, an annual festival that takes place forty days before Páscoa (Easter) and four days before Quarta-feira de cinzas (Ash Wednesday) during the Brazilian summer, in February or sometimes March. In the southeastern cities of Rio de Janeiro and São Paulo escolas de samba (samba schools) organize parades that are staged in the sambódromo (“sambadrome”), a specific outdoor area for the samba schools to parade, pretty much like a wide avenue with a grandstand on both sides for spectators to watch. Samba schools’ members parade around in their fantasias (costumes) and some of them dance on top of carros alegóricos (floats), as they move along. In Bahia, apart from samba, they have some other musical rhythms, such as samba-reggae and axé (a musical style of percussion with roots from Africa). Musicians play on floats equipped with giant loud-speakers and hundreds of people follow them, singing and dancing. In Pernambuco the main rhythm is the frevo, a popular acrobatic dance with African influence, often using a small open colorful parasol and with fast movements.

Check out below for the names of some samba school members and other Carnaval characters:

Rei Momo: “the cerimonial king of carnival”. Each Carnaval has its own Rei Momo (King Momo) and his appearance symbolizes the beginning of the festivities. This character wears a crown and is traditionally fat and tall.

Porta-bandeira or Porta-estandarte: the flag-bearer of the samba school, a female character who carries the school flag during the parade and wears a very elaborate costume.

Carnavalesco: “the carnaval reveler”, the artistic director of a samba school. He is usually the person who designs the costumes and floats.

Referência: “Say it all in Brazilian Portuguese!” – José Roberto A. Igreja, Disal Editora